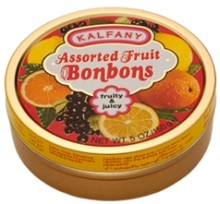 The Kalfany company which today is known as Kalfany Süße Werbung GmbH & Co. KG, was founded in 1948 by Karl Berger and his wife Franziska ‘Fanny’ Berger in Munich. The company’s name ‘KALFANY’ is derived from the first names of the founders.

The former Kalfany Bonbon GmbH was the first company in Germany to package its lozenges in tins.

Kalfany Bonbon GmbH moves from Munich to Müllheim in the Black Forest.

Kalfany Bonbon GmbH is bought by the Zertus Group in Hamburg.

ZERTUS takes over Pulmoll and the Dutch brand Diele, which are seen as the ideal addition to Kalfany’s assortment. Click here to go to the history of Pulmoll.

With the acquisition of Pulmoll, Kalfany became the largest tinned lozenge manufacturer in Europe. Choosing Müllheim as a location meant that everything was focused on integrating the production infrastructure in the plant. The factory had to be enlarged in order to meet the capacity requirements for the production of Pulmoll pastilles.

In the meantime more then two-thirds of all cough lozenges sold in Germany are produced by Kalfany Süße Werbung GmbH & Co. KG. More than 200 employees use the latest technology to create fruit and throat pastillesfor the national and international market. In addition, other brands like Diele and Echt Sylter Brisen-Klömbjes are produced.

Company-history
Webdesign and Developed by April&June GmbH
*
**
***
Steviol glycosides from the Stevia plant.
Pulmoll sugar-free contain isomalt instead of sugar and thus contribute to the
maintenance of tooth mineralization.
A varied and balanced diet and a healthy lifestyle are important for your well-being.

This website uses cookies to improve your experience while you navigate through the website. Out of these, the cookies that are categorized as necessary are stored on your browser as they are essential for the working of basic functionalities of the website. We also use third-party cookies that help us analyze and understand how you use this website. These cookies will be stored in your browser only with your consent. You also have the option to opt-out of these cookies. But opting out of some of these cookies may affect your browsing experience.
Necessary Always Enabled
Necessary cookies are absolutely essential for the website to function properly. This category only includes cookies that ensures basic functionalities and security features of the website. These cookies do not store any personal information.
Non-necessary
Any cookies that may not be particularly necessary for the website to function and is used specifically to collect user personal data via analytics, ads, other embedded contents are termed as non-necessary cookies. It is mandatory to procure user consent prior to running these cookies on your website.
SAVE & ACCEPT