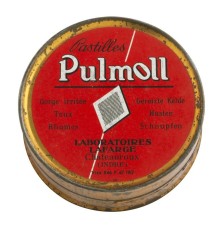 Pulmoll has been a tried and true throat pastille for over 60 years and one of the best known brands on the German market.

Pulmoll pastilles were invented by the French pharmacist Jacques Lafarge in 1946 right outside the gates of Paris. The brand name is derived from the Latin word ‘pulmonis’, which means lungs. The small pastilles were such a great success in France that shortly after their first appearance on the market other tastes were introduced as well. Ten years later, the Laboratoires Lafarge was already producing more than ten million tins per year.

The unique flavor of the Pulmoll Original is based on a combination of liquorice root, honey and menthol. In 1956 the Pulmoll pastilles were introduced for the first time in Germany as an OTC product (over the counter product). Since then, the Pulmoll pastille has remained virtually unchanged in recipe and thus still offers the unmistakable and unique taste.

The soothing and good-tasting small pastilles in the eye-catching tin quickly became one of the most successful tinned lozenge brands in Germany.

At the beginning of the 1980s, Pulmoll introduced eight additional herbal and fruit varieties to the market.

Since 2012, our sugar-free Pulmoll pastilles contain the sugar substitute Stevia*, which is derived from nature and fruit juice concentrate has also been added to all of the fruit flavours.

Today the Pulmoll product range contains 10 varieties (3 sugared & 7 sugar free) , which are mainly sold in pharmacies, drugstores and food retailers, as well as in many internet shops.

Pulmoll pastilles are available abroad since the 1980s.

In France, Greece, the Netherlands, Italy, Austria, Spain and meanwhile also in Eastern Europe and overseas fan bases exist. For many of them the small soothing pastilles have become indispensable.

Therefore, the small tinned pastilles are famous far beyond the borders of Germany.

About Pulmoll
Webdesign and Developed by April&June GmbH
*
**
***
Steviol glycosides from the Stevia plant.
Pulmoll sugar-free contain isomalt instead of sugar and thus contribute to the
maintenance of tooth mineralization.
A varied and balanced diet and a healthy lifestyle are important for your well-being.

This website uses cookies to improve your experience while you navigate through the website. Out of these, the cookies that are categorized as necessary are stored on your browser as they are essential for the working of basic functionalities of the website. We also use third-party cookies that help us analyze and understand how you use this website. These cookies will be stored in your browser only with your consent. You also have the option to opt-out of these cookies. But opting out of some of these cookies may affect your browsing experience.
Necessary Always Enabled
Necessary cookies are absolutely essential for the website to function properly. This category only includes cookies that ensures basic functionalities and security features of the website. These cookies do not store any personal information.
Non-necessary
Any cookies that may not be particularly necessary for the website to function and is used specifically to collect user personal data via analytics, ads, other embedded contents are termed as non-necessary cookies. It is mandatory to procure user consent prior to running these cookies on your website.
SAVE & ACCEPT